It’s 2077. We have been expanding our presence on Mars, which involves trial missions, in-depth research, terrain checking, the first human landing on the surface of the Red Planet and the creation of a scientific base, for several decades now.

Driven by curiosity and the desire to learn and expand human possibilities of adapting to new living conditions, we decide to establish colonies on Mars.

The inhabitants of the new Martian city-states are not accidental. They were selected based on their health, intellectual and psychological abilities as well as the skills they will contribute to building a new society drawing from the mistakes made on Earth…

25 students, divided into interdisciplinary groups, are starting to work on the project of five Martian colonies. They include representatives of geology, law, architecture, design, and culture. Supported by mentors, they try to find answers to the following question: What location on Mars will be the most appropriate for their colony considering the possibility of easy landing and take-off, access to a water source as well as the scientific and soil-forming potential of the area?

In terms of architecture and design, they must remember about the impact of temperature, sandstorms, harmful radiation, and meteorite strikes but also make sure that the colonies are self-sufficient and provide shelter for thousands of people. Also in the spotlight are such important questions as: How will our senses react on Mars? What do we, as humans, need to survive in an extreme environment?

The Mars Colony Hackathon participants are also discussing whether they want to transfer the current Earth culture as well as the economic and political status quo related to it to Mars, or… on the contrary? Should they take the current trends in sustainability, climate change, inequality, diversity, and the impact of technology on people into account? What values, traditions and rituals will accompany them?

There are already five colonies on Mars: IGNIS, MARIS, MONADA, M.O.D. AND WEST COAST COLONY. They are all self-sufficient, but willingly cooperate with one another and with Earth in the exchange of goods, know-how as well as education and tourism. They all signed a non-aggression pact.

Goods are transported by centrifugal force technology, and people move between colonies on sub-orbital rocket flights. In the close vicinity, the inhabitants travel by rovers.

We visit the IGNIS colony, located in the Athabasca Valley in the Elysium Planitia region.

It arose from a research colony founded in the 2040s by the International Organisation whose inhabitants revolted and declared independence. The main IGNIS doctrine in international relations is not getting involved in the political affairs on Earth. Its inhabitants live in symbiosis with nature, and they base their sustainable development on science. They obtain water thanks from the nearby pingos, and their source of energy is a cosmic solar power plant in a geostationary orbit, sending energy in the form of high-frequency radio beams. The power plant has movable panels, which enable the plant to draw energy throughout the day and night. The inhabitants expect that at a later stage the development of the energy sector will be based on small modular reactors (SMR). The IGNIS system is a hybrid of the republic and direct democracy. Everything that is produced in the colony as well as all the tools and items that the inhabitants use belong to the republic and are used on a shared basis. 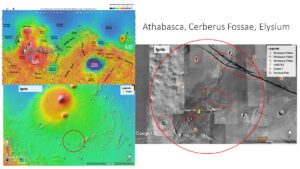 We continue our journey to visit the MARIS colony, located in Valles Marineris.

As a result of human activities on Earth, the climate crisis deepened, natural resources were depleted, and biodiversity was disappearing. In the social field, we were affected by wars, social inequality, discrimination, and polarisation. The human condition was also deteriorating because of loneliness and civilisation diseases. The founders of MARIS wanted to change that, so they decided to create their Martian colony – a new community based on responsibility and integrity of human beings with the planet, community, and themselves. The local habitat is famous for its hydroponic crops and baths with saunas. The community cares about good mood and mental health of every citizen, which ensures the proper functioning of the entire colony. Therefore, apart from integration, a common dining room, kitchen, or medical, educational and laboratory space, it places great emphasis on providing the inhabitants with private space. As guests, we are invited to one of the capsule-rooms that function as bedrooms. We immediately experience thermal comfort and silence. We can also regulate the amount of light. The whole room is finished with a soft material and there is a pleasant smell in the air… 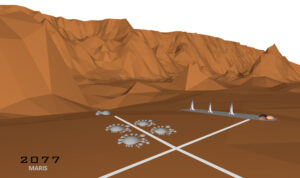 Next sol we travel to the northernmost colony of MONADA, located between Mamers Valles and Deutronilus Mensae.

In some philosophical systems, a monad is a basic substance, on the one hand elemental, permeated with individuality, and on the other hand, rich in various types of capital. It gives almost unlimited development opportunities. The MONADA inhabitants treat their colony as an organism which, having a huge and varied potential, can not only develop independently, but also establish relationships with other entities in the world, which is a continuous collection of elementary substances.

Its architectural solutions are also based on spherical units, which are self-sufficient and independent in a crisis, but for the sake of proper functioning of the society they connect with one another to form a network. Each unit has the necessary sectors located on different levels: industry, food production, public utilities, such as hospitals, schools, and religious places, as well as housing. Light runs through each sphere from above and cascades across the room. The radial layout of rooms and internal space can be modified by moving the walls.

The colony has one of the largest deposits of magnesium-rich sulphur oxide and olivine as well as access to several rubble glaciers which constitute the source of water. MONADA sells its medicines, steel, solutions related to design and architecture, including modular furniture, “my personal sun” lamps, personalised “Martian wallpapers”, aromatic postcards from Mars as well as a patented circulation system and inter-colonial rover loading system both to the countries on Earth and the Martian colonies.

The next stop on our Martian journey is M.O.D. (Martian allotments), located in Dao Vallis.

It is an international, democratic colony, still dependent on the Earth for the supply of certain raw materials and resources.

It was built of modular segments created with a 3D printer and completely hidden under the surface of Martian regolith. The main element of the individual residential modules are internal allotments used for garden cultivation, experimenting, and relaxation. The colony focuses on simplicity and minimalism in limited Martian conditions, hence the white walls of the rooms and easy-to-modify segments. The virtual reality used in the colony, however, allows its inhabitants to create an environment that gives a sense of greater security, avatars, or everyday outfits to express themselves and their individual style. Special overalls worn by the inhabitants check their vital functions, hormone levels, and work-life balance simultaneously.

M.O.D. conducts intensive research to increase recyclability and the best possible use of limited Martian resources as well as to develop production and plantations that provide the colony with food and vital products.

The joint work of the M.O.D. inhabitants strengthens intergenerational ties, giving an opportunity for integration and talks. Each of the inhabitants undergoes compulsory training to be able to work in various sectors of the habitat if necessary.

WEST COAST COLONY, located in the Olympus Mont region, is the last stop of our trip.

Separation of powers, peaceful space exploration, cognition and science, high level of education, cooperation between humans and artificial intelligence, transhumanism, and bionics – these are the bases of its functioning.

The area chosen by the inhabitants for their colony is convenient not only in terms of living, but also for geological research. The magnesium- and iron-rich basalt rocks present here are a good raw material for construction and the production of soil fertilisers. The colony bases its economy and exports on them.

The colony is highly automated. Robots are used in the transport of raw materials and products from/to factories, the production of modular elements for housing, cultivation, services, and even administration.

The West Coast Colony inhabitants believe that as humans we have certain limitations, and we must constantly overcome our weaknesses. Therefore, they focus on transhumanism and gene improvement in such a way as to adapt the human body to the difficult Martian conditions. They also place great emphasis on inclusiveness, cultural and social life, common rituals as well as education and learning the truth about the universe. The colony also includes green zones for rest and recreation with plants brought from Earth… 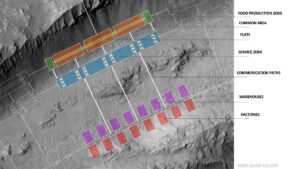 We are going back to Earth. There is a war going on across our eastern border and climate change brings us intense winds, rains, earthquakes, and volcanic eruptions…

Some people question the sense of organising such design and humanist workshops or hackathons. But maybe travelling to Mars in our imagination will help us see and express what we do not like here on Earth, change the things that should be changed or even adopt a completely different approach to things we know? Is it not thanks to our dreams and imagination that we are able to look into the future and create the world we want to live in? Not only on Mars, but also here on our planet Earth…

The Mars Colony Hackathon was organised by the US Embassy and ​​the European Space Foundation in cooperation with the Polish Space Agency and Venture Café. The workshop took place on 4-6 March 2022 at the Cambridge Innovation Centre in Warsaw.