On September 10-12, 2021, the 7th edition of the European Rover Challenge – one of the most significant space events in Europe – will be held. In addition to the international Martian rover competition, a three-day, very diverse program has been prepared for the visitors. Robert D. Cabana, the Associate Administrator of NASA, Robert Zubrin, from The Mars Society, as well as representatives of the space companies and the world of science will be among the speakers. Experts from the European Space Agency and the European Union Agency for the Space Programme EUSPA, a partner of the event this year, will also be speaking.

Friday, September 10, is a day entirely devoted to Mars, whose recreated volcanic area Elysium Planitia is this year’s arena of struggle for Martian robots. Parallel to the competition, in which the rovers will compete, the audience will participate in numerous lectures and workshops divided into three thematic blocks. As part of the “Inspiration Zone,” experts will share their knowledge on further exploration of the Red Planet and the search for signs of life. During the day, attendees will hear lectures from NASA Associate Administrator Robert Cabana, Dr. Tanya Harrison, a manager of science programs at Planet Labs, and the experts from NASA, Explore Mars and Aerojet Rocketdyne.

Saturday will revolve around the Moon. Throughout the day, both online viewers and visitors of the Kielce University of Technology campus will participate in presentations and debates on the economic and business potential of the Silver Globe. They will be introduced to the topic by, among others, experts from the European Space Agency ESA, POLSA, and the American Federal Aviation Administration FAA. The program will include a discussion of the Moon’s energy resources, led by Gordon Wasilewski of Astronika, one of the grand prize sponsors in the ERC competition. In turn, fans of space literature will be able to enjoy a conversation with Andrew Chaikin – author of “A Man on the Moon:  The Voyages of the Apollo Astronauts” or a debate with Prof. Chris Welch from the International Space University.

The organizers devoted the last day of the ERC to Earth and the use of space technology in everyday life. Experts from the European Union Space Programme Agency EUSPA, which manages the public interest in the field of, among others, Global Navigation Satellite System in Europe GNSS, in such projects as EGNOS, GALILEO, and COPERNICUS, will share their experience. The program will also feature representatives of companies that have already successfully implemented space technologies operating in various areas of the economy. An exciting highlight of the day will be the speech given by Billy Almon, the former creative director of Walt Disney Imagineering on nature-inspired solutions aimed at improving the lives of people on Earth and traveling to the stars. 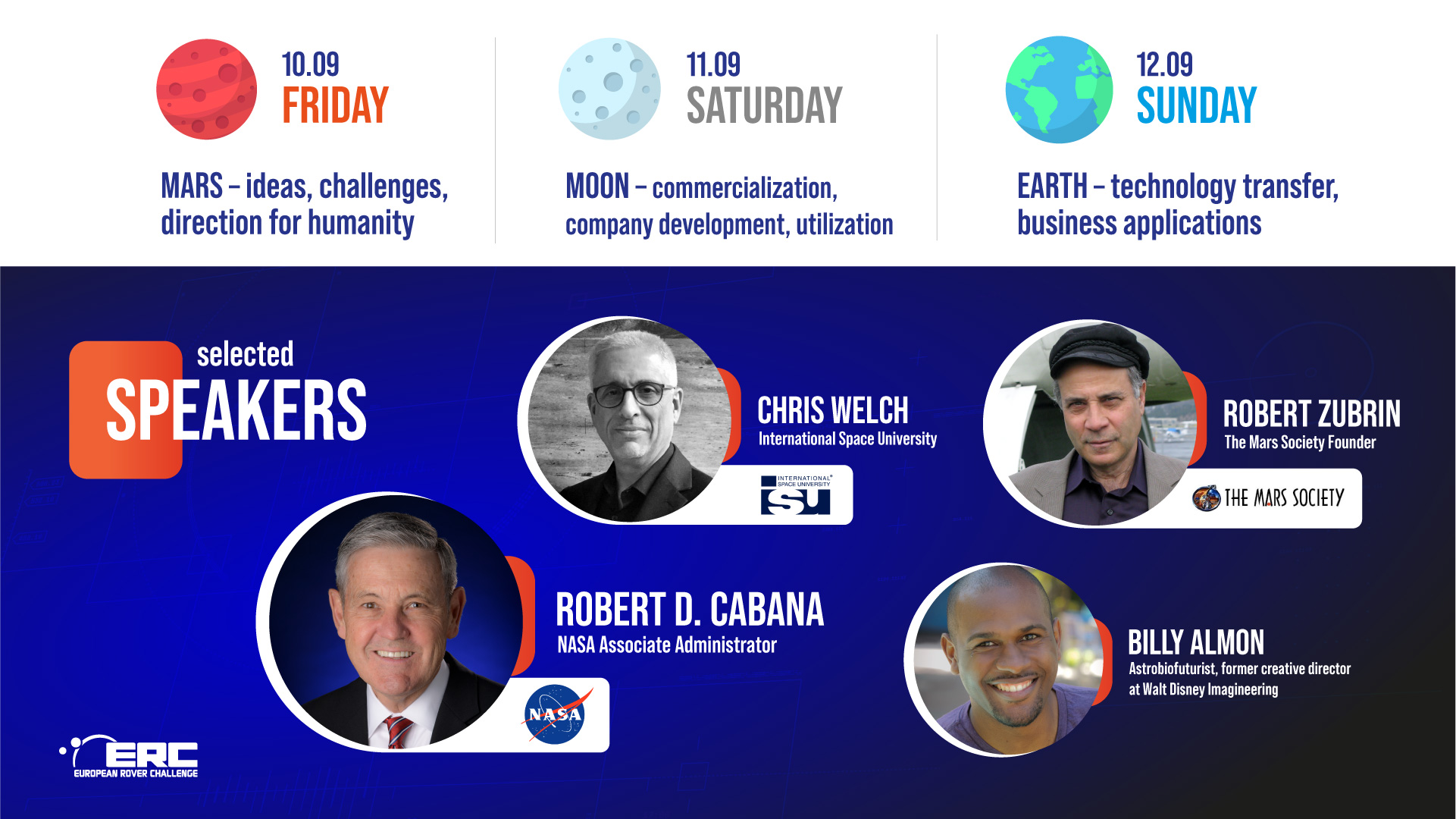 A full schedule of the event is available at  www.roverchallenge.eu.

European Rover Challenge is one of the Europe’s most significant space events combining the international Mars rover competition with scientific and technological demonstrations and lectures, which has hosted representatives of the world’s major space agencies for seven years. Guided by the motto “we inspire a new generation,” since 2014, the organizers have been bringing space closer to the public and raising awareness of the growing role of modern technology in everyday life. ERC is also a meeting place for representatives of the European scientific and business world interested in using space and robotics technologies. The project is supported by the “Social responsibility of science” program of the Ministry of Education and Science.

Co-organizers of the event are the European Space Foundation, Special Economic Zone “Starachowice” S.A., Swietokrzyskie Voivodeship, and the Kielce University of Technology. The Strategic Partner of the event is Poznan Supercomputing and Networking Center. The City of Kielce shall act as the Host City. Honorary patronage over the event was taken by the European Space Agency, Minister of Education and Science, Minister of Foreign Affairs, Ministry of Development and Technology, EURISY, Space Sector Employers Association, and Polish Optical Internet PIONIER.